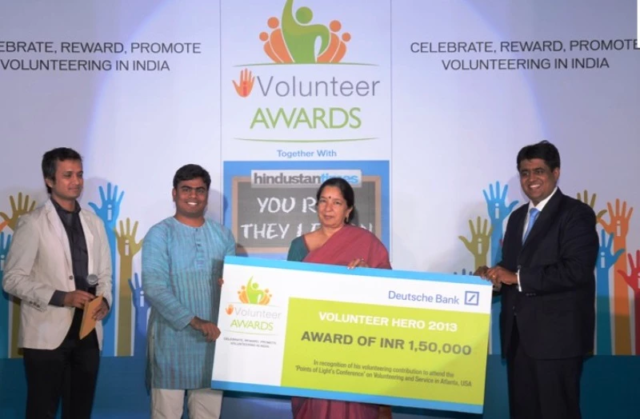 iVolunteer Awards : Celebrate the excellence in individual as well as organizational volunteering.

Volunteering lays the foundation for people to actively build communities and the nation they thrive in. Yet, in modern India, there is little recognition of volunteering. iVolunteer Awards aim to change this with a mission to celebrate, reward, and promote volunteers and volunteering in India. Created by the largest volunteering social enterprise in India, iVolunteer, these awards are the only Indian awards to nationally celebrate the excellence in individual as well as organisational volunteering.

The iVolunteer Awards, aiming to popularise volunteering and leadership in India, actively engaged over 600,000 people with an outreach of more than four million people in the year 2017. The previous editions of the awards have been supported by leading media organisations such as Hindustan Times, Zee TV, NDTV, Your Story and The Logical Indian that believe in the power of volunteering and want to be associated with a growing movement that leverages the power of people, professional service and other organisations for transformative community impact. In the previous years, eminent personalities like Ms. Nandita Das, Mr. Abhishek Bachchan, Shri. Vinod Tawde, Mrs. Shikha Sharma and Mrs. Rajshree Birla have joined us in awarding the volunteering heroes.

Held annually since 2012, iVolunteer Awards are, today, the premier national recognition for the exceptional volunteering initiatives by young champions, NGOs, individuals and corporate organisations for their devotion and relentless commitment towards building a better society for all and inspire others by example to come and participate in this developmental transformation. iVolunteer Awards are an initiative of iVolunteer, a social enterprise that has been at the vanguard of volunteering since 2001 in India.